This past weekend saw my fourth excursion down south for Stacey's always wonderful Lake District Live show in Storth.

The first two years I would swing through Glasgow to pick up EG as a driving companion. Since she doesn't have personal transport, getting to the show would have been difficult for her and it's always nicer and safer to travel with a friend. On these trips we stayed in the adorable and comfortable George Washington in Warton, which is a tiny little town, but fairly close to the show in Storth.
Last year, since we had room in the car, we branched out and invited Magda in Edinburgh to join us. That year she took the bus to Glasgow and we stayed in a hostel in Arnside, another quiet town, but along the bay instead of in the hills like Warton. This year instead of making Magda take the bus, I picked her up near her home in Edinburgh before heading to Glasgow.

We're not too particular about the exact town we stay in for LDL, as long as it's in the general area; hotel-wise we like cheap and clean. This time the place we booked was a bit further away; Morecambe is about half an hour from Storth at the mouth of the bay. We stayed at The Trevelyan, just off the seafront, which was simply outstanding. A lovely little town and the accommodations couldn't have been nicer. By unanimous consent, we'll be booking there again next year.

Normally the Morecambe Bay area is warmer than our various abodes in Scotland, but this year was simply scorching! We started sweating not long after leaving Glasgow and I didn't dry out again until I got near Perth (and I'm from Texas!). I'm surprised my shirts didn't fade.

As soon as we arrived, around 4pm, we carted our models up to our room on the third storey as Julips do not like the heat. After three or four grueling trips (Julips are also HEAVY) we opened the window, set up the fan, and flopped onto our beds. When we had somewhat recovered we set out upon the town. 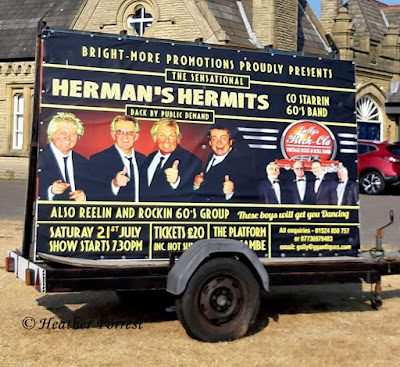 The first sight to grab my attention was this billboard. I didn't know the Herman's Hermits were even still performing, much less coming so close to us! Mom and I are seriously contemplating a trip down for this.

It is easy to see that Morecambe at one time was a major watering hole for the region with a large, outdoor "walk-in" swimming pool, and numerous, beautiful, though aging, buildings. The pool seems to now serve as an amphitheater. We were charmed by the numerous decorative touches along the sea walk and the wide variety of bird statues and other decorative elements. 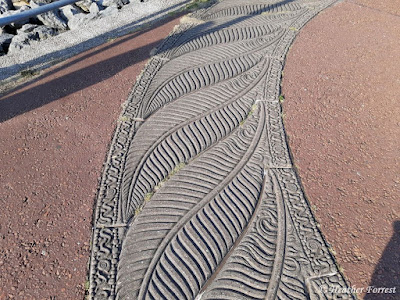 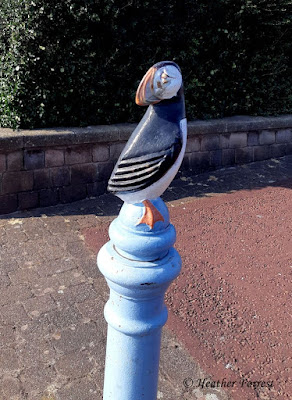 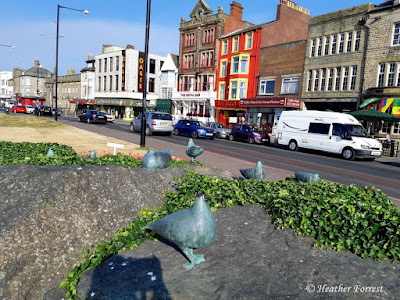 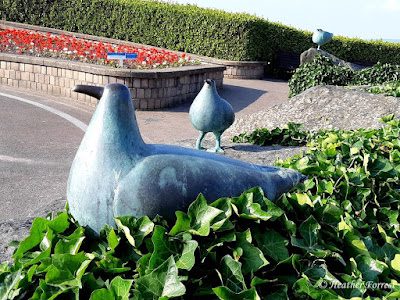 During the day there looked to be many shops open ranging from tourist junk to antiques and more ice cream parlors than you could shake a stick at, but by the time we had recovered enough for a walk, only the pubs and restaurants remained open.

Among these we found it difficult to pick our dinner location, finding ourselves spoiled for choice. Each time we stopped to read a menu, we found a departing patron eager to recommend the location. We eventually settled on one pub-type spot which, like it's neighbours, had more than just the standard pub menu. Our meals were delicious, interesting, and surprisingly cheap.

Our restaurant of choice had the most beautiful period decor, the crown jewel of which was this tile wall. I couldn't get the whole wall as there were people sitting in front of it, but it was stunning. Seriously, my heart hurt a little. It was all carved columns and paneling and fancy molding, all in tile.

Thoroughly stuffed and still more than a little warm, we staggered back out upon the sea walk and down to the beach. There I hunted tiny shells for my 1/12th scale antique/junk shop and the others hunted (with their cameras) for tiny crabs which, when you looked closely, were swarming along the water's edge. The Morecambe beach is a pleasant mix of sand and pebbles flowing into a long, shallow stretch of water. You have to watch, though as it gets muddy and sticky very quickly and the tides in the area can be dangerous to the careless. 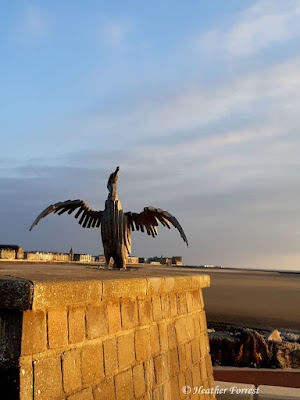 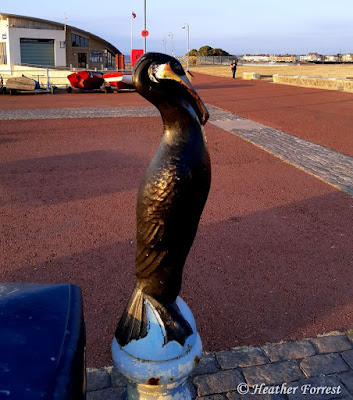 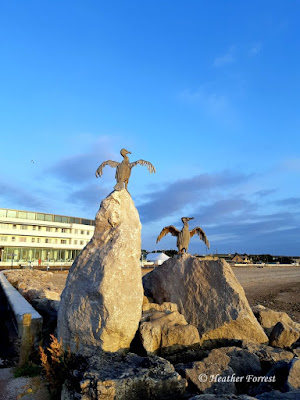 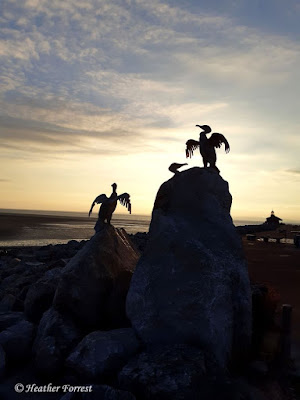 It was creeping up on ten by the time we wandered back to the room - the night was so beautiful and the cooling breeze so refreshing we didn't want to go back in. After a cool rinse in the shower, we set the morning alarm and turned in. I awoke some time before the alarm from the heat, so I headed off for my shower, leaving the girls to sleep in peace, freed from my dreadful snoring.

After my shower while they were sleeping and later, preparing for the day, I loaded the car and tried to restrain my early morning energy. We had a cold breakfast of cereal and milk and hit the road. First stop was the Aldis for our lunchtime sandwiches (we had plenty of other snacks in the car) and then on to Storth.

We arrived just as folks were beginning to set up, and thankfully, before Miss Laura and Mr. R. It doesn't do to be late for the Spares Frenzy. We worked away at unloading our models and a year's worth of chat (for us Northerners, this is our only show of the year) until Miss Laura announced her intention to release the spares. More about the results of said frenzy in the next post.

When I saw the haze coming in off the bay in the morning, I knew we were in for a hot, humid day, and I was right. I haven't been that hot for that long in a long time, thankfully. Unfortunately, having my life slowly drained from me left me in such a daze that I only took a couple of photos of the day and those only of my entries in the Pets Scene class and one other. 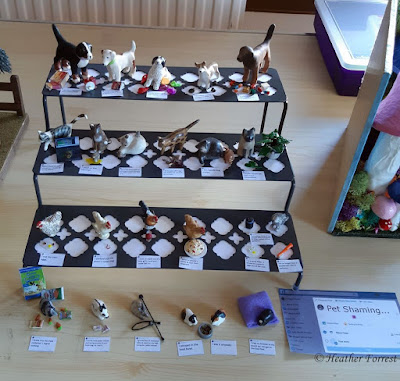 My pet shaming entry, which kept cracking me up the whole time I was working on it. These are all real pet shaming posts from the internet - the hard part was narrowing down my choices to just a few. I think my favourite prop of the lot was the road kill, my favourite "shame" was the cat who peed on the hamster. I really need to take individual pictures of this later. 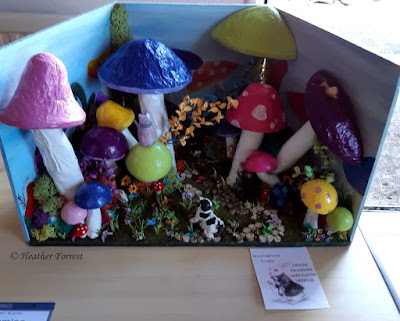 Did you know you can buy dyed reindeer moss in like, every colour? I didn't know until I saw it on eBay. I had to have it, and then I had to find a way to use it. When you have a Cheshire cat in your collection it's only natural to do a Wonderland scene. The card reads: "Jane is beginning to regret following this particular rabbit down his rabbit hole." 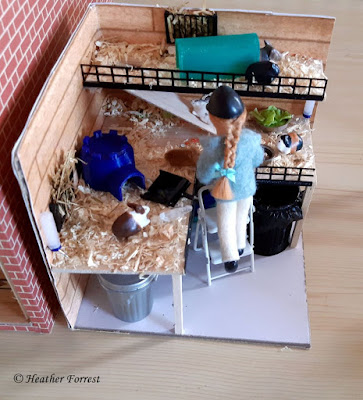 My only other picture from the show is of Stacey's adorable little guinea pig and rabbit hutch scene. 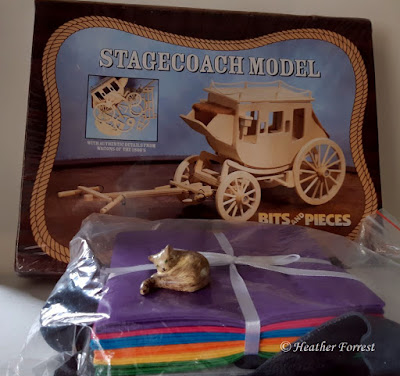 At lunch time we had the raffle and I was unexpectedly lucky winning almost everything I put a ticket in - a Stagecoach kit, the Julip cat Miss Laura donated, a set of horse themed pencils/stickers/erasers (not shown as they were claimed by my son), and Magda's excellent donation of leather and cloth.

Despite the heat I did well at the show, placing in many classes and taking champion in the colour division with my new purchase and Champ and Reserve in the Pet Division with two of Mr. R's little headaches. 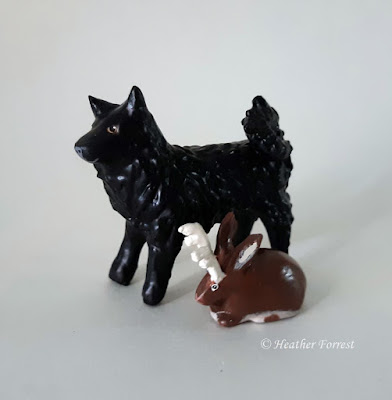 The show finally broke up around five and we headed slightly inland to the restaurant Miss Stacey had booked. Miss Laura and Mr. R followed us in their car and, amazingly we made it to our location without any unexpected detours. If you knew our track record you'd be shocked, too. We had a lovely 15 minutes or so sitting in the cool pub area sipping icy drinks and chatting (I folded magazines) before being called to our table. Since we had pre-ordered, our food came almost immediately and we set to.

Because of the heat we only stayed until 9 or 9:30, unlike last year when it was nearly 11 before we finally took our leave. There was more chat in the cooler parking lot before we all saddled up and headed to our respective destinations. I had an ice cold shower before bed and actually got a good night's sleep - the girls were tired enough to sleep through my nasal concert, so we all woke refreshed. In the morning, after a cooked breakfast, we loaded back up and hit the dusty trail. First, though, we had to make a quick stop at a blisteringly hot junk shop and then pull in to check out the outdoor Sunday market.

These little chores done, we headed out again, windows down, panting like dogs. The cooler air of the dales was absolute bliss, even if it did warm up a bit as we passed Carlisle. Three hours later we dropped EG off at her home and set out for Edinburgh and its delightful construction zones. After dropping Magda off I eventually found my way out of town and onto the open road, arriving home around 6pm. All in all we put 680 miles on Road Hog that weekend. I was absolutely exhausted, but had to get to work the next day preparing for the Friday Magpie release, especially as on Wednesday I'd be heading back to Glasgow with my mother for the Paul Simon Farewell Tour concert! 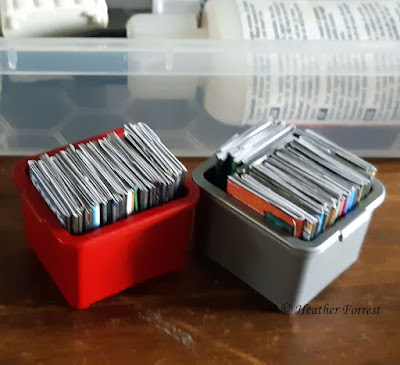 It was a productive, as well as entertaining weekend as I made some Magpie and personal sales, and managed to fold almost 50 magazines for my doll's shop.

Thank you to my traveling companions for a wonderful weekend. Same time, same place next year? And a huge thank you to Miss Stacey and her family for another delightful show, it just keeps getting better and better.

For those who haven't made it to a Lake District show, I highly recommend it. It is in a beautiful area and the show holders put on a most excellent show, well planned and relaxed yet efficient; their hospitality bags alone are worth the drive, and you couldn't meet a friendlier family. The regular attendees as well are a great bunch and such fun.
Posted by Heather Forrest at 1:20 pm