If you've ever seen a school of large goldfish being fed in a small pond, you will have some mental picture of the energy of a Spares Frenzy. As soon as Miss Laura announced she was putting out the spares, we swarmed from all over the hall. "By chance" I was right next to her as she was putting out the models and snatched my first, a dark flaxen chestnut Cob Stallion, before he barely had time to hit the table. I then saw spots in the box, so naturally I followed her as she moved on as I've been wanting a Laura-era appaloosa for ages.

Having made my choice, I left the others to the equine feeding frenzy and made my way to where Mr. R was quietly laying out the animal spares. There I was able to leisurely pick and choose my favourites.

When I grabbed this guy, I hardly had a chance to see more than the fact that he was dark, chestnut, and cobby - later, the more I examined him, the more was delighted by my choice. He is an absolutely delicious, rich dark red chestnut, with just enough white. His flaxen mane and tail aren't too contrasty and are mixed with sooty coloured strands.

I showed him that day as "Plum Wine", which was the first thing to pop into my head, but he got a proper name later that night. He and his brother Cob, Southern Gothic Boudin, took first and second respectively in the Chestnut colour class, and Plum went on to take champion in the division.

His prefix comes from the name of a town not far from Carlisle and his name, Charivari is a folk-method of expressing a community's displeasure towards a wrong doer. In the Southern US we pronounce it "shivaree" and is a more lighthearted ritual, often associated with weddings, a bit like the Scotish tradition of "blackening".


We are huge Moana fans in our house and my son's favourite song is "the crab song", known to the rest of the world as "Shiny" in which the fabulously glam giant crab Tamatoa flaunts his stuff. I've listened to this song a lot, seriously, a LOT, so naturally this name was on my mind when it came time to find a name for my spotty little Shetland.

His prefix, Pucklechurch, is one which all my new mold Shetlands share. I started using it for my Black Beauty collection, which contains my first modern Shetland; I was looking for an interesting prefix for my Sewell horses and found that the parish of Wick & Abson where Anna Sewell once lived, used to be a chapelry of Pucklechurch before becoming its own parish. The name tickled my fancy and the relationship was close enough. So now all my modern Shetlands belong to Pucklechurch.


The very first pets I grabbed were a pair of Corgis. Since the first Corgi was my special order, I've been eager for more, but didn't want to put Mr. R through another major customization job. Now that I know he's made a new mold for the Corgi, the gloves are off!

Aren't the new Corgis adorable? All of mine have Welsh names, naturally. Llechi means "slate" in reference to his colour, and Eiriasaf means "white-hot" which I thought an appropriate nod to the weather that day. 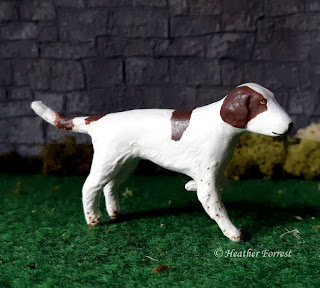 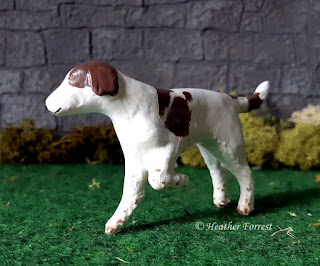 Versailles is my first example of the Pointer mold. She looks a bit like one of my other dogs, Rosalie, in colour, so I wanted to pair their names in some way. Rosalie is the French version of the Latin Rosalia, and when Googling I was lead to the Wiki page for the anime, The Rose of Versailles, which has a character named "Rosalie". I like the sound and shape of the word and think it suits this hound rather nicely.


Miss Laura kindly donated Festive to the raffle, and I was lucky enough to win her! Many of my Sleeping Cats have "holiday" type names, such as Merry, Jingle, Joy, and Carol, so I wanted something to fit with them.

Before Lake District I only had a pair of ducks and a laundry list of potential special orders. This spares batch allowed me to cross a couple off the list. All of my ducks are named after cartoon characters - the first were a pair of Mallards, Boris & Natasha. This group I named for characters from Popeye the Sailor Man

While I have a laundry list of duck ideas, my list of piggie colours is like something out of the Doomsday Book. These guys tick a couple of boxes on that list, so little by little we'll whittle it down. I like themes, so all my piggies are named after Pokémon, naturally.

I had just received my order of Harlequin rabbits at the show and thought this guy would fit in with the newcomers quite nicely.

My rabbits started out named after characters from Watership Down, but I quickly ran out of names I liked. Now we have a general nature theme with a few exceptions.


This girl was hiding in her coop during the photo shoot, so we'll just have to make do with the quickie picture I took of my spares group that night after the show.

All my chickens have two part names, a rank name and then a word or phrase in Latin. I'm not really sure why. Torreo means "white-hot".


While not spares, I did pick these guys up at the show. It had been a while since I had placed a rabbit special order, so I thought it was time to torment Mr. R a little bit with this batch of Harlequin rabbits. 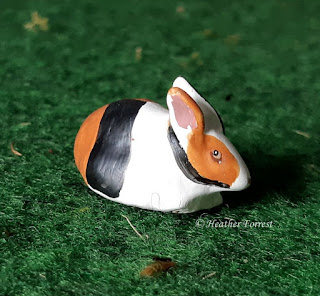 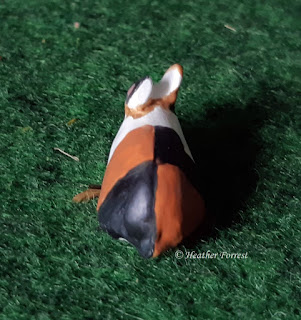 Battenberg is one of the exceptions to the rabbit name theme, but really, could he have any other name? His pattern is based off of a picture of a real rabbit, but I cannot share it here as the image does not belong to me. This isn't the exact image I used for reference, but it gives you the idea.


Part of my rabbit order was not a Harlequin, it was in fact probably the worst thing I've asked Mr. R to do so far, and he pulled it off beautifully. Meet Catnip, the Jackalope.


I have always loved the Jackalope, as a child there was a store near us which had a massive sculpture of one out front, and as the self-proclaimed Rabbit Queen, I simply had to have one if at all possible. Luckily Mr. R is still speaking to me after this, though I don't know why. Catnip took champion in the Pets division at the show.


This guy was formerly a spare. I missed out on him one Spares Night and was happy to take him in partial trade for a custom order jump. He arrived the day after I returned from Lake District, so I thought he should go in with this lot.

I've had a terrier order planned for a while, one of which was going to be a Westie just like this, so now I have one less dog to order. Draoidh is Scotish Gaelic for wizard/druid.
Posted by Heather Forrest at 6:12 pm