The only thing I bought during our Saturday rummage of the junk shops was a prettily embroidered hankerchief to turn into a bedspread for the brass bed in the Magpie's Nest, but I found a ton of excellent little bits at the carboot on Sunday. 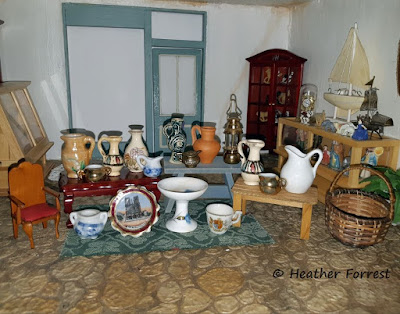 This little lot (not including the tables) set me back a whole £6. The seller would not haggle at all, but I think it was well worth it as there are some lovely pieces in there and I ended up paying about 30p an item, which isn't bad. My favourites are the Limoges plate, the incredibly heavy brass lantern, and the textured green and white pitcher at the back. 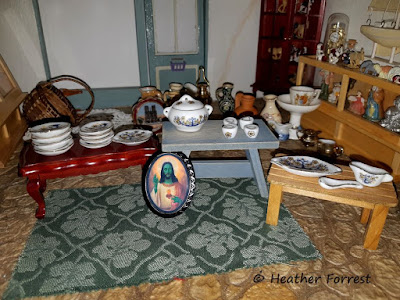 This second lot came from two different stalls. The Zombie Christ set me back £2, but I had to have it. I'm always a sucker for dishes and the pattern on these reminded me of some of our old Corningware dishes. 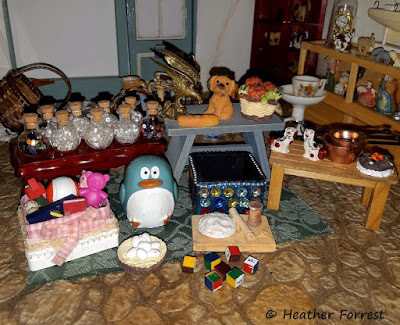 The brass eagle was 50p at one stall, and the zombie Jeeb seller gave me the "diamonds & gems" for free! They came in a plastic box, but I thought they looked nicer in the jars. The rest of the items were part of a bag of bits. I only wanted the little wally dogs, but the seller wouldn't split the lot. I got the bundle cheaply enough and I'll have a use for all of it eventually. The pots and the little wooden blocks are especially nice. 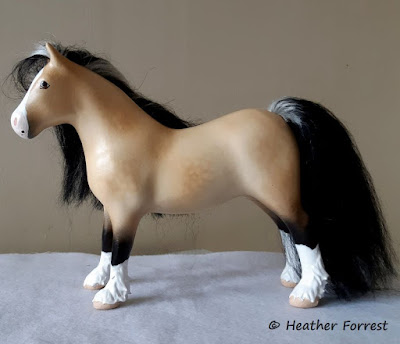 Eulalie is the first horse I grabbed and I just absolutely adore her. She's a fjord-cross with added feathers, soft dapples, and frosting in her mane and tail. The second picture is a more accurate representation of her colour.


I'm not really a foal person, but I thought this flaming chestnut Yearling was too pretty to pass up. He fits in nicely with my chestnut Arabian family; he looks like a lighter version of my stallion, Pax Romana.


I had originally selected a bay tobiano, dropped head New Forest, but after lunch I decided I just wasn't taking to him and Laura very kindly allowed me to swap him for another model.

I love the cranky Child's Jumping pony and black horses, so this one was a perfect combination for me.


Naturally I also brought home a mess of pets.

Mr. R had a few surprises for us this year, including three different pecking hen molds - in order shown: large, fluffy, and stretchy.

At first I behaved myself and only took two so as to leave some for others, but later in the day I went back and saw that there was a stretchy hen, among several other pecking hens left over, so I didn't feel bad about completing my trio.


At first I only bought President Nequa Atramento as I have more roosters than one really needs, but I later went back for one of the unusual grey boys. I then won the black one in the raffle. He's even fancier than he looks here as he has metallic patches of colour on his wings and back.

I couldn't resist this lovely pair. I think they might be wood ducks, but I'll have to ask Laura to check with Jane. The drake has that fancy metallic paint, too.

Naturally I ended up with a few more of the tiny pets. When I swapped my New Forest, there was a £3 difference in price, so Heliotrope ended up joining the bunny army.


Fortinbrass is such a simple colour, but one which really suits the mold. The pricked ears really change the look of it, too. He ended up taking Champion in the pets division as "Bella".

Bilbo is the new Terrier Cross mold. It was created for a special order back in Dec. 2018, but this was its debut as a spare. It's really a cute little mold and looks sweet in rough and smooth coat.


Most of my Sleeping Cats are on the pale or grey side, so these two really stand out in the crowd. Orla is actually my first calico cat in any mold.


The confettimatian, Jede Farbe (every colour) needed some friends, so I ordered a few which were ready to pick up at LDL. There's Viscountess Vere Viridis (spring green) the Lime Leghorn, Electra the Bluemese, Magmar the Flameypig, and Orchid the Plum Bun. 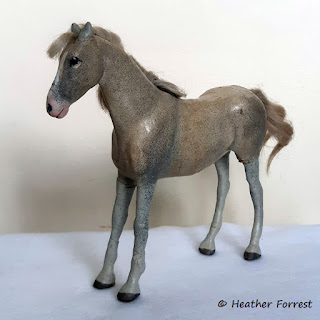 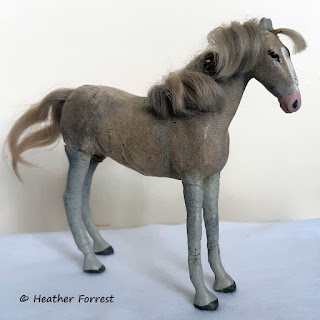 During lunch the show rings were used as sales tables and these vintage guys somehow ended up coming home with me. I can never resist a pet, and the child had such a lovely face. Sanskrit kept giving me the puppydog eyes and I do like the leggy TB, even if he is a bit rough. My other vintage Thoroughbred is a lovely flaxen chestnut roan, but he currently lives in the hospital barn as several of his legs have fallen off. They'll make a nice pair one day, though. 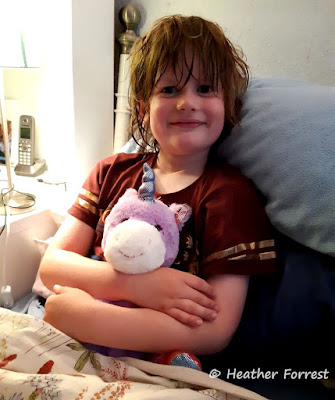 In addition to the cockerel, I also won this super soft unicorn in the raffle as a gift for my son. He's named it "unicorn" (thus demonstrating why he doesn't get to name our pets) and hasn't let it out of his sight since.

Now I've just got to find a moment to unpack!
Posted by Heather Forrest at 9:17 pm